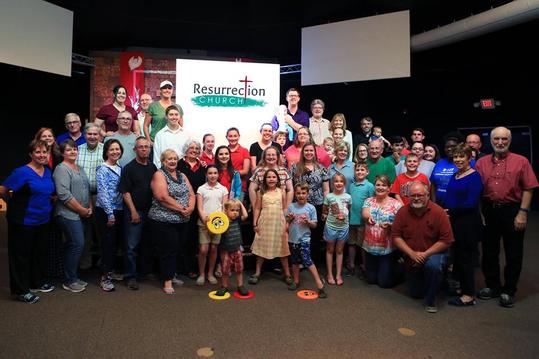 Our Story
The origin of Resurrection Church (formerly The Church of The Apostles) can be traced back to  1997 and the emergence of the First Promise Movement in the Episcopal  Church. Based on a document written by 30 Episcopal priests led by Chuck Murphy, the movement declared the authority of the Episcopal Church to be fundamentally impaired because it no longer upheld the truth of the gospel.   Out of this movement, a small group of faithful people from the Fayetteville and Hope Mills area began to meet in each other’s homes to worship and share the Gospel.  In January 2001, the small group attended the first AMiA (Anglican Mission in America) Homecoming Winter Conference in Pawley's Island, SC. The process of discerning a church plant in Hope Mills, N.C. began at the conference. Out of that discernment Reverend King Cole of Saint Andrews in Morehead City, N.C., (now All Saints Anglican Church in Newport, N.C.) was called to provide spiritual oversight. Upon their return home, the small group began planting a church.
In June 2001, the new church plant in Hope Mills chose the name The Church of the Apostles and held its first public service at the Hope Mills Community Center. During the service, the church officially received confirmation as a church plant of Saint Andrews and celebrated its first baptism.  Under the spiritual oversight of Reverend Cole and the faithfulness of the original small group, the church began to grow. The church leadership explored a suitable location for the church and prayed for a pastor.
Through God’s grace and much prayer, the church saved the money needed to hire a full-time pastor, Dan Alger.  In November 2002, Dan and his wife Karen moved to Fayetteville, N.C.  In 2003 Dan  was ordained as deacon and then as priest.  Because of its growth in members, the church moved from a double-wide to office space in a cotton mill – affectionately called “The Mill” – in downtown Hope Mills. The church eventually outgrew its office space at “The Mill” and moved into a nearby warehouse space while the office was used for children’s ministries.
In 2007 Vance Tyson, one of the original faithful, was ordained a deacon. During this time 13.7 acres on H. Bullard Road in the Grays Creek community was gifted to the church. Soon after, construction on a new sanctuary began.  Built by Sprung Structures, the building became a curiosity to people in the area who thought it was a tent due to its unique design. The people of the church were committed to the project and many spent their time, talent and treasure to see the church completed.  On December 24, 2008, members gathered in the new building to celebrate Christmas Eve and in January 2009 began regular worship in the new space.
In January 2012 the church changed its affiliation to become part of PEAR USA, taking the first part of its name from the acronym for the Rwandan church's official French name Province de l'Eglise Anglicane au Rwanda. The following month after nearly ten years of ministry Rev. Dan Alger resigned as pastor. Dan was followed by an interim, Don Schultz, and a new pastor, Rev. Bob Hackendorf.  Prior to Dan's resignation and following his departure the church continued to face financial and attendance issues resulting in the departure of several staff members.  In January 2016, the church again changed its affiliation from PEARUSA to the Anglican Church in North America (ACNA) under the Diocese of Christ Our Hope.  In March 2016 Rev. Bob Hackendorf resigned as pastor of Church of the Apostles. Chris Walk was ordained as a deacon the following month in April.
After Bob's resignation, Bishop Steve Breedlove stepped in to provide a plan of pastoral care for the church. Anglican chaplains from Fort Bragg took turns leading Sunday services while Apostles embarked on a nearly year long search process. In January 2017 after interviewing and considering numerous candidates, Church of the Apostles unanimously called Rev. Elijah Lovejoy to be the church's new priest. He had been serving as an Anglican priest in the Greensboro and High Point, NC area for the previous eleven years. Elijah along with his wife Brandi and their four kids joyfully accepted the new call, and he began work on Ash Wednesday, March 1, 2017. During his interview process, Elijah asked church leaders to consider a church relaunch with a new church name, new vision, new direction and new community park as an effort to reinvigorate the church and reintroduce itself to the community. The church's call of Elijah was confirmation of this vision.
On June 7, 2017 after a thirteen week membership class, Church of the Apostles membership unanimously voted to change the church's name to Resurrection Church and to build a community park called Resurrection Park adjacent to the church. Since that time  members have rolled up their sleeves to build an 18 hole disc golf course, a basketball court, a playground, swing set, two horse shoe pits, a quarter mile walking trail and over 20 bird houses for bird watching. The church sees Resurrection Park as their "front porch" and a community gathering space. Membership and giving have continued to grow with the church relaunch and new vision. Both leaders and members sense the Lord's blessing and presence and look forward to what adventures the future holds.
Bishop Steve Breedlove ordained Chris Walk as a priest at Resurrection Church on October 10, 2019 with much celebration and reverence. Chris began attending the church in September 2005 after moving down from Ohio to be a math teacher. The ordination service was the culmination of many years of growth, love, prayer, hard work and sacrifice. Chris now serves as an Assisting Priest at Resurrection Church.